The Daily Planet is a world newspaper processing building and one of the main locations in the series.

It has had it's share of threats and even been burned down but the great Metropolitan newspaper is here to stay.

It was previously owned by the newspaper's board of directors, then by scheming businessman Lex Luthor who deliberately burned it down to collect the insurance and finally generous philanthropist Franklin Stern . 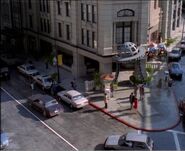 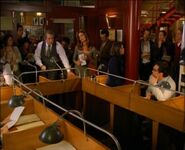 The Meeting room
Add a photo to this gallery
Retrieved from "https://lois-and-clark-the-new-adventures-of-superman.fandom.com/wiki/Daily_Planet?oldid=4797"
Community content is available under CC-BY-SA unless otherwise noted.